Can you cater for parents who don't speak your language?

Kinteract has a very exciting feature which we haven't made a big deal about yet but we think we really should.

Have you ever launched a new system or platform for home-school communications or home learning but found parents, or students, are struggling to understand it as you are writing in a language they either do not speak at all, or cannot read in? So many initiatives fall by the wayside with parents who are not native speakers of your target language. This may make those parents, and students, seem harder to reach when in actual fact they do want to be fully involved. Parents and students feel left out of information, and even worse left out of some of the education on offer.

Even offline can be harder still as parents may not always have someone around to translate. For pupils with SEND they may not be able to assist their parents, and the same is true for pupils new to the country too as the more technical aspects of the language may leave things lost in translation.

Language can be a barrier to communication in lots of ways. For individual pupils it may mean they misunderstand instructions, or complete homework incorrectly or by the wrong day. Parents may miss vital updates about their child, or not feel involved in school events and communications.

Imagine you write a message on your newsletter such as the following:

This message maybe isn't considered a vital one to translate. But if the parents concerned did donate books it would be nice for them to have the thanks and information too. (And maybe the reason they didn't donate in the first place is because the original plea for books was not translated either?)

It could have been an even more important message about what to bring on a school trip, or about informing the school about allergies, or it could be a message specific to their child's learning or development. Easily missed by parents who do not speak English, in this example. And this is happening all the time on plenty of systems which are unable to translate this message. Many systems now offer to load up in a different language when a parent logs in. But even then this usually means the text on the buttons within the site or app are translated, but not the messages from teachers themselves.

In Kinteract we found another way and you have probably already spotted on the message above the "See translated" option. Below you see this has changed to "see original" and the actual message has been automatically translated within Kinteract into Polish. The hashtags are not translated as these are for school use to track across and beyond the curriculum, but the rest of the message is now accessible to parents who speak Polish.

And here is it again in German:

The same message, translated into a multitude of languages at the touch of the button. The user (parent or student) can change the translated language themselves via their profile or the school can add this for them. The language list isn't as exhaustive as we would like yet but we are working on that as much as we have the control to!

You can see here just some of the available languages: 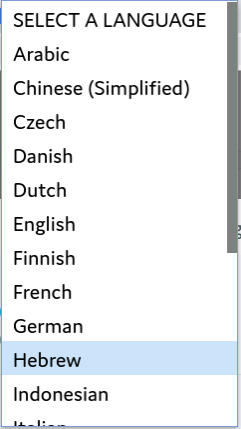 Imagine the delight of a parent who usually cannot access parents' evening without relying on translation from their child who may not get some of the nuance of the teacher comments, or who may (sorry but it happens) deliberately withhold some of the information?! Imagine the translation above was not just for whole school messages but for assessment messages and praise of their child. Or information which is vital to them as a whole family such as help applying for benefits they may be missing out on?

And for settings teaching older students - imagine accessibility for every student no matter how new they are! They can hit the ground running in ways not possible before in other systems.

When you realise you can reach so many more parents than you are used to we are sure you will see that the possibilities become endless in terms of using the translate option in Kinteract to share messages knowing everyone can read them instead of just your English (or other native) speaking parents.

AND imagine then that the parent writes a reply in their own language and the teacher can translate that into their language and read it? Because this functionality works that way too if the parent or pupil posts in their home language.

We know. It's pretty exciting. We should really have mentioned it sooner. But here you have it. Now get in touch to find out more about how to activate this for your Kinteract school, or to book a demo to see how Kinteract could revolutionise both assessment AND home-school communications in your nursery, school, college or university!